Welcome to the new season and with it a new look to The Round-Up. A change of format for the 2016/17 season as we drop The Tuesday Round-Up covering every match played over the weekend from all of the leagues above, instead a smaller more compact and personal Round-Up featuring the leagues that matter to you. Do not worry you will still see every game covered across the East just in a smaller package 7 Round-Ups a week when the whole region gets into swing instead of one. This one starts with covering the action from Sunday August 21st across the FAWPL Southern and South East Division One Divisions their season kicking-off this weekend.

Lewes Ladies are the side sitting proudly at the top of the FAWPL Southern Division after the opening round of fixtures this Sunday. At home at The Dripping Pan hosting West Ham United Ladies with former Brighton & Hove Albion WFC manager, James Marrs now in charge. The visitors looked to be in full control of the match as they stormed into a 2-0 lead inside 15 minutes, Katie Bottom and Whitney Locke with the goals. Danielle Lane pulled it back to 2-1 for Lewes on 21 minutes before Rachel Palmer found the back of the net from a free-kick outside the box. Game on a complete turn around as Kim Stenning struck to give Lewes a 3-2 lead, Palmer with her 2nd goal just before the half-time whistle a 4-2 lead for Lewes. The home side went on to extend their advantage in the 2nd half with Kelly Newton scoring on 48 minutes with both Lane and Stenning finding the back of the net for a 2nd time to see Lewes who spent most of last season in the bottom half of the Southern Division table, top looking down at the rest.

The FAWPL Southern Division could have a number of possible title contenders this season and one of the  favorites for the title are Charlton Athletic WFC, runners-up last season starting their campaign this season at home to newly promoted, Swindon Town Ladies. A convincing 4-0 win sees them pick up there 1st 3 points 2 goals scored in each half. Katie Flack getting there season rolling on 11 minutes, wasn’t long before striker Gemma Shepherd got in on the scoring opening her seasons tally on 17 minutes, forming a formidable attacking partnership with Kit Graham she had to wait until 9 minutes into the 2nd half to score her 1st goal of the season with Charley Clifford adding the 4th goal 20 minutes from time.

Joining Lewes and Charlton with an opening day win in the Southern Division are, C&K Basildon Ladies as they begin their 2nd season in the league were at home at Canvey Island FC playing Portsmouth FC Women with Craig Taylor now managing the 1st team. Zoe Rushen is C&K Basildon Ladies new captain following the retirement of long serving Claire Lacey. Rushen got her clubs season started scoring to give them the lead at half-time, however it wasn’t until 3 minutes from time the 3 points were sealed Lily Mellors with the goal late on to see C&K Basildon earn the win final score 2-0. 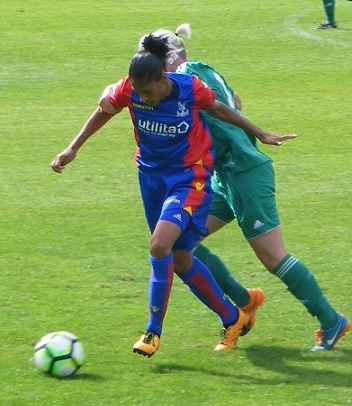 One more game at the weekend at the Bromley Arena as the other newly promoted side to the league, Crystal Palace Ladies took on last seasons FAWPL League Plate Winners, Coventry United Ladies. Unbeaten as they won the FAWPL South East Division One title last season, Crystal Palace Ladies got off to a flying start taking control of the game early on Gemma Bryan  (pictured right) was on hand to steer a Rochelle Shakes cross home inside opening 20 minutes. Slow to get started the visitors picked things up late in the 2nd half, Samantha Smith getting forwards from midfield to head home a Gina Burton cross on 37 minutes. 1-1 the score at half-time. 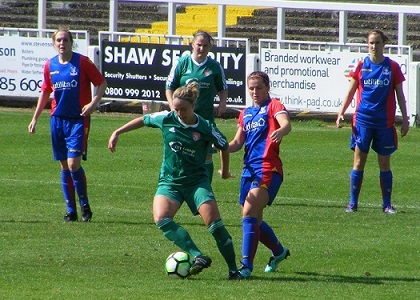 Coventry United Ladies had an opportunity early in the 2nd half to take the lead from the penalty spot  as Crystal Palace goalkeeper Chanelle Yardley brought down Alison Hall as she came to the edge of her area to clear the ball. Yardley made amends saving the spot kick guessing right diving to her right to grab hold of Marie Gauntlett’s shot. A spell of dominance followed for Crystal Palace in which they were to score again to take the lead, Bryan racing clear of the Coventry United defence to send the ball in off the post from outside the box. 20 minutes left and Smith was to add her 2nd goal of the game too taking aim from 30 yards out sending the ball arrowing into the top corner. That was to be the final score 2-2 the points shared on the opening day. This was were the Supporting Women’s Football Blog began the season and the full match report can be found on this website or by clicking on the link below

3 sides in the Southern Division sat the opening weekend out, Queens Park Rangers Ladies and Tottenham Hotspur Ladies along with Cardiff City Ladies who were due to play Forest Green Rovers Ladies who have sadly taken the tough decision to pull out of the league having lost alot of senior 1st team players and not wanting to expose a young squad to such a high level of football, wish the everyone involved at the club all the best for the future and hope to see them back soon.

Was a full fixture list in the FAWPL South East Division One to start the opening weekend. Several sides in contention for the title and promotion in this league this season, no overall clear favourite and could well be a dark horse too. No easy game that is for certain. We’ll start with a local derby as Norwich City Ladies travelled over the Suffolk border to play Lowestoft Town Ladies at Crown Meadow. Chelsea Garrett got the visitors off to a fantastic start scoring on 7 minutes 2-0 was the score at the break Ebony Wiseman on target on 38 minutes. Norwich hammered home there advantage early on the 2nd half Ellen Swift with 2 goals on 50 and 58 minutes to make it 4-0. Lowestoft captain, Hannah Waters pulled a goal back for the home side with 20 minutes left. Norwich making it 5-1 in injury time with substitute Millie Bales bagging the goal. The +4 goal advantage seeing Norwich top of the league.

Milton Keynes Dons Ladies have strengthened their squad over the summer have a new 1st team manager too, James Honeyman. Started with an away trip to Denham United Ladies and got their season off to the perfect start taking all 3 points with a 3-0 win the goal scorers Leah Cudone, Kerry Newman and Charly Wright. Ipswich Town Ladies scored 3 goals on the opening day of the season too and still didn’t anything from the game as they travelled to one of the two sides newly promoted to the league, AFC Wimbledon Ladies. Natasha Thomas got Ipswich off to a great start scoring on 2 minutes held the lead for over half an hour before Wimbledon got themselves back level Laura Low scoring in the 35th minute 1-1 at half-time it as a crazy start to the 2nd half a minute on the clock Sian Wylie put Wimbledon into the lead. Ipswich responded immediately, Hollie Clement striking from distance to make it 2-2, 3 minutes later and Wimbledon  were back in front Jess Trimnell with the goal went on to add another on 75 to put Wimbledon 4-2 ahead. Samantha Walker scored on her debut for Ipswich with 5 minutes left however Wimbledon held on to record an opening day win playing their 1st FAWPL match.

Stevenage Ladies are the other newly promoted side to the league were at home on the opening weekend taking on Enfield Town Ladies both sides with a new manager at the start of the season, Gary Bailey taking over at Stevenage with Marc Nurse formerly of West Ham United Ladies taking over the reigns at Enfield Town. It was the visitors who came away with the 3 points, Elizabeth Kent and Ellie Taladiana with the goals. Stevenage missed an opportunity to score from the penalty spot before, Rebecca Scola a 2nd half substitute scored late on for Stevenage Ladies having joined the club from Hoddesdon Town Ladies. Final score 2-1 to Enfield.

2-1 was the winning margin for Actonians Ladies too, away from home taking on Cambridge United WFC at their new home for the 2016/17 season Mildenhall Town FC.  Cambridge started the brighter but were to fall behind as Actonians found the back of the net from a set-piece. Becky Taylor drew the scores back to 1-1 before the break scoring from a corner. The game was to see a long delay at half-time due to an injury to Actonians player Anais Escalona an ambulance called a stoppage off over an hour saw play resume at 4pm, Actonians going on to score the winning goal 7 minutes from time Jessica Byrne and Carla Williams the players on target for Actonians. Women’s Football East wishes Anais Escalona all the best and hope she makes a speedy and full recovery. One more game from the South East Division One between two of the sides who will be looking to chase down the title this season with Luton Town Ladies hosting Gillingham FC Ladies. After a goalless 1st half Luton were to get their noses in front at the start of the 2nd half, Dionne Manning making her debut for the club scoring the goal. The lead wasn’t to last long Gillingham equalising on 56 minutes, Felicity Gibbons having returned to the club after a spell with Brighton and WSL side Millwall Lionesses finding the back of the net. 1-1 the final score the points shared.

Updated league tables, fixtures and results can be found throughout the site the new season has begun in earnest.