Bedwell Rangers FC are always interested in hearing from new players and coaches for our teams playing in the Hertfordshire Girls Football Partnership League – particularly girls who are in School Year 7 or 9 to join our Under 12 and 14 girls teams
Matches are played Saturday mornings
Training is Tuesday evening
For more information, please contact Derek Fieldsend on 07981 013467 or derekfieldsend@btinternet.com Alternatively more information is available on the club website www.bedwellrangersfc.co.uk 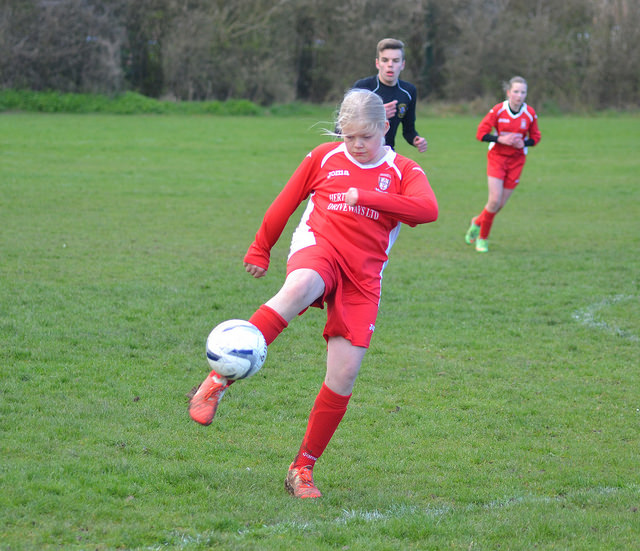 Following a fantastic year for the girls section of Bedwell Rangers FC, the Club are looking to build on this success throughout 2016.

2015 saw the Under 17s crowned League Champions, The Under 12 Meerkats pick up the Hertfordshire Girls Football Partnership League Fairplay Award and the Under 11 Stars win the Enfield Town Ladies Tournament.

The first few months of the 2015/16 season has seen the number of girls playing football for the Club grow yet again. With the addition of a newly formed Under 8s and a 2nd Under 11s squad the Club now has 11 girls teams plus a Ladies team – making it one of the leading clubs in Hertfordshire for girls football.
The Under 16 Titans currently lie 2nd in their league and have reached the Semi-Finals of the County Cup.

An exciting new partnership has been set up between Bedwell Rangers, Barclay School, Herts Sports Partnership and Stevenage Borough Council to provide free weekly football sessions for school year 7, 8 and 9 girls every Wednesday afternoon. Bedwell Rangers continue as Advanced Club Associates of Arsenal Ladies FC which will see coaches from the Women’s Super League club providing coaching sessions for the Stevenage based club and girls from Bedwell being mascots and flag bearers at Arsenal Ladies matches.